The modern company was created by the engineer Herbert Buckley before the second world war when he saw the demand for wear resistant components from local machine tool manufacturers for application in their higher performance machines. Demand for those services grew throughout 1939-1945 war.

Herbert Buckley worked with and was then succeeded by his daughter Brenda who was a highly regarded professional metallurgist in her own right. As an MD of a thriving business in a very male oriented world world she was a woman years ahead of her time. 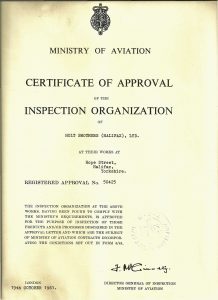